Pemon: The Tree of Life 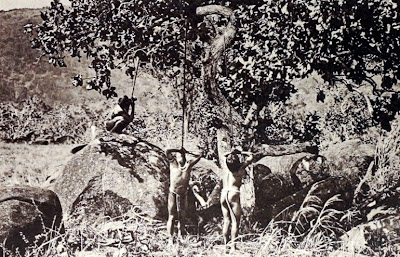 Pemon Myth 2: The Tree of Life
This creation myth describes a time when the ancestors of the Pemon suffered from great hunger and how the agouti, then a man, discovered a magical tree in the jungle which was laden down with all the fruits and vegetables in the world. The translation is taken from Maria Manuela de Cora's book "Kuai-Mare: Mitos Aborigenes de Venezuela" (1957, Editorial Oceanida). The photograph of three Pemon men with blowpipes is taken from Theodor Koch-Grunberg's 1917 book "Vom Roroima Zum Orinoco".

Many moons ago, the great Caroni valley was called Uek-tá, which means land of the mountains. That was because in the vast plains watered by the rivers Yuruaní, Tiriká and Aichá, arose the mountains Iru-tepui, Aparmán, Apakará, Chimaté and Auyan-tepui, the motionless spirits of the plains that Wei, the Sun, would hide himself behind every night, and from where the breezes came which rustled the Moriche palms that dotted the savannah.

At the edge of the valley was the jungle, closed off by gigantic trees covered with lianas and reverberating with animal sounds. The jungle was far away, but the brown immensity of the plains made it appear closer.

In this land of mountains lived five brothers: Makunaima, who was big and bad, Zigué, which means chigger; Wacalambé, a whirlwind; Anzikilán, a partridge; and Ma'nápe, which means melon seed.

In that far off time there were no conucos (gardens), because people did not know how to grow things and had not learnt to hunt or fish yet. The five brothers were always very hungry and could find no way to sate their hunger.

Close to where they lived, resided a man called Akuli (an agouti). Later on he became a rodent and that is how we know him today. 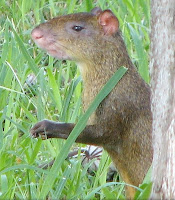 Back then Akuli was very light and ran all over the place, sometimes passing through the thick vegetation bordering the savannah to enter the jungle.

One day Akuli ventured quite far into the jungle when he saw a huge tree he had never noticed before. It was the marvellous Wazacá tree, which produced several kinds of plantains as well as papaya, cashew, maize and many other fruits and vegetables.

Akuli was filled with awe looking at that tree. It was so big he couldn't see all of its trunk in one look.

He had a taste of all the delicious fruits and vegetables and - in a very happy mood - he marked the place where it grew so he could always find it when he wanted to.

So, every day, as the the valleys of the Aichá and the Kuaná were lit up by the sun, Akuli went off into the jungle, found his marvellous tree and ate the fruit until he could eat no more. The he went home, telling nobody about what he had found.

But one day, Makunaima noticed how well Akuli looked and suspected that something had to be making him so fat.

So he waited until night time, when Akuli returned from one of his forays and slyly said to him:
- Why don't we turn in, brother-in-law? We should do it now as the wind is bringing the breeze from the Moriche palms.
Akuli thought it was a good idea and fell straight into a deep sleep. Makunaima carefully opened his mouth so as not to wake him and saw that he had a bit of fruit stuck between his teeth; a small piece of Wazacá plantain - a long, delicious and magnificent plantain.
Akuli was so fast asleep he didn't notice anything.

At the end of the night as Wei rose again over the mountains, Makunaima called Kali (Guianan squirrel), who was also a man at that time, and told him to follow Akuli and not to let him out of his sight until he discovered where Akuli was getting the fruit.

So Kali went with Akuli into the heart of the forest, pretending not to spy on him, and every now and then he asked him:
- What tree is this? What's this other one called?

But Akuli didn't answer him, and even when they passed in front of the tree with all the fruits - which many parrots and macaws were feasting on - he did not stop as usual, and so Kali never learnt where it was.

Makunaima was furious when he learned of Kali's failure and decided to send his brother Ma'nápe the next day, believing that he was smarter and would discover Akuli's secret.

Ma'nápe agreed to acompany the other two and together they entered the jungle. They went quite far, passing many bushes and trees, but Akuli did not stop at any of them.

At last they stopped in front of the Zaú tree, whose fruit has a very nasty taste, and to play a trick on Ma'nápe, Akuli said to him:
- You can stay here and collect the fruit from this tree. We are going to continue on to see if we can find another one.

Without replying, Ma'nápe stayed where Akuli told him to.
Meanwhile Akuli and his companion carried on walking and eventually arrived at the place where the Wazacá tree stood.

Akuli stopped there and and said:
- This is the tree that has all the different fruits. Look how many there are on the floor. Why don't you eat them?

But Kali said:
- It looks to me like the ones up there are better. I'm going to go up and get some.
- There are also lots of wasps up there and they will sting you, said Akuli, better not to climb up.

But Kali was very stubborn and he climbed as best he could up the enormous trunk until he reached the first branches, bent under the weight of the fruit, which cast shadows on the ground like giant condors with hundreds of heads.

Just as Kali reached out for a large plantain, one of the best fruits, he felt a terrible buzzing around him as a cloud of wasps swarmed all over him and stung him on the eyelids.
Kali fell to the ground dazed and in pain. He said to Kali:
- Oh, friend, that stuff about the bees was right, and for not listening to you look what's happened to me!

And that is why Kali has had swollen eye-lids ever since. 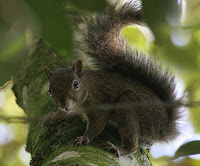 When Makunaima saw Kali with his eyes all swollen he thought something odd must have happened.

He was also angry with Ma'nápe for stupidly staying where they had told him and for not discovering anything. So he said:
- Tomorrow, after sunrise, you will go with them; but when they get ahead of you hide yourself on side of the trail and find out where they are hiding the plantains. Then you can eat them anytime you want as well.

Ma'nápe did as his brother had told him and protected by the branches of a macanillo tree, waited for the other two to return. But Akuli suspected something was up that day and hid the fruits further away, in a more isolated spot than usual.

So when they approached the place where Ma'nápe was lying in wait for them, they were not carrying any fruit in their baskets or their hands, and there was no sign they had eaten anything - not even in their mouths.

Several times Ma'nápe tried the same ruse, but he was always outsmarted by Akuli and Kali, and many suns passed without him finding anything.
Then Makunaima said to him:
- Don't hang back on the path. You have to follow them wherever they go. That's the only way you can catch them out.

Ma'nápe agreed and next time they entered the jungle when they got to the spot where they used to leave him, he said to Akuli:
- This time I shall come with you further.

Akuli tried all his tricks to shake off Ma'nápe, but seeing that he couldn't do it he led him to the tree and showed him all the fruits.

There it was. The world tree.

Thicker and taller than any other tree, it was like a great mountain in the middle of the jungle. The knots in its bark were like rocky gorges embedded in the trunk. So lush was its vegetation that the sunlight stopped when Wei passed over the top of its high canopy.

In the halflight that pentetrated past its branches, wasps, parrots, macaws and many other birds fought over the delicious fruits, which gave off a fragrant aroma and never ran out.

Ma'nápe was struck dumb as he tried to take it all in and then he turned to the others and said angrily:
- How could you come here every day and fill your bellies without telling anybody?
- Don't be angry, said Akuli apologetically. We only wanted to play a trick on you.

But Ma'nápe wasn't listening. He was too busy nibbling away at the fruits that were on the floor and the ones he could reach from the lowest branches.

When he was full he made basket of palm fibres so he could take some to his brother.
- Mind the wasps, Akuli warned, seeing him climb up the tree.

But Ma'nápe said that they would not sting him, and so it was. The wasps let him pick the fruit without attacking him.

When the basket was full, Ma'nápe marched happily back to the valley and told Makunaima everything that had happened and all about the strange tree that produced every kind of fruit.

And Makunaima was happy and the brothers ate and ate until they were full.

Very similar to the Ye'kwana myth.

Public Speaking Events
Do you need an inspiring, well-informed speaker for a travel seminar, travel writing workshop or event about Venezuela?
I have given presentations and illustrated talks at a number of prestigious venues and travel events, including:
Adventure Travel Live - London
Destinations - Earl's Court
Venezuelan Embassy in the UK
(Video of event)
Reading Borough Library
The Globetrotters Club - London (1 October, 2011)

Buy my book: The Bradt Guide to Venezuela

Russell Maddicks
After 12 years of adventuring in Venezuela I came back to try my luck in the UK. Although I try to visit Venezuela as often as I can it does tug at my heart strings some nights that I am too far from Choroni to hear the tambores on the malecon. Fortunately my job as a journalist in England allows me to follow Venezuelan and Latin American developments and keep my Spanish up to scratch. The UK is also a good place to do research and meet other like-minded Latin-America-philes for proper rum and salsa sessions.